Since the PlayStation 5 launched in November, the console’s really only had two major exclusives: Bluepoint’s Demon’s Souls remake and Housemarque’s Returnal.

PlayStation Studios has otherwise adopted a controversial cross-gen approach and brought several big games to both PS4 and PS5, leading many gamers to yearn for more PS5-only titles that truly take advantage of the new hardware’s capabilities.

Fortunately, Insomniac has answered the call with a brand-new Ratchet & Clank game, Rift Apart, which has been built from the ground up exclusively for PS5. It’s an investment that’s paid off wonderfully, with Rift Apart being both a well-rounded technical showcase for the PS5 and a genuinely excellent game in its own right.

Picking up after 2013’s Ratchet & Clank: Into the Nexus, Rift Apart sees Clank successfully rebuilding the Dimensionator to help Ratchet find the other Lombaxes, only for Dr. Nefarious to steal it. In the process, rifts are torn open between dimensions, threatening the entire multiverse and leading Ratchet, Clank and a new Lombax named Rivet to try to save the day.

If you’re a bit lost reading that, I can empathize; I went into Rift Apart having only played 2016’s Ratchet & Clank, a remake of the series’ nearly 20-year-old first outing. Since then, there have been more than a dozen Ratchet & Clank games. That’s what makes Rift Apart‘s story so commendable; it’s been carefully written to be enjoyable for everyone.

“What Insomniac has achieved in Rift Apart from a visual perspective is absolutely jaw-dropping.”

Sure, fans will appreciate the numerous winks to previous games, like the radically different dimensional counterparts of old characters like Skid McMarx and Rusty Pete. But the overall premise — splitting up Ratchet and Clank, introducing a new playable character (Rivet) and taking the story to new dimensions — helps Rift Apart be quite inviting. 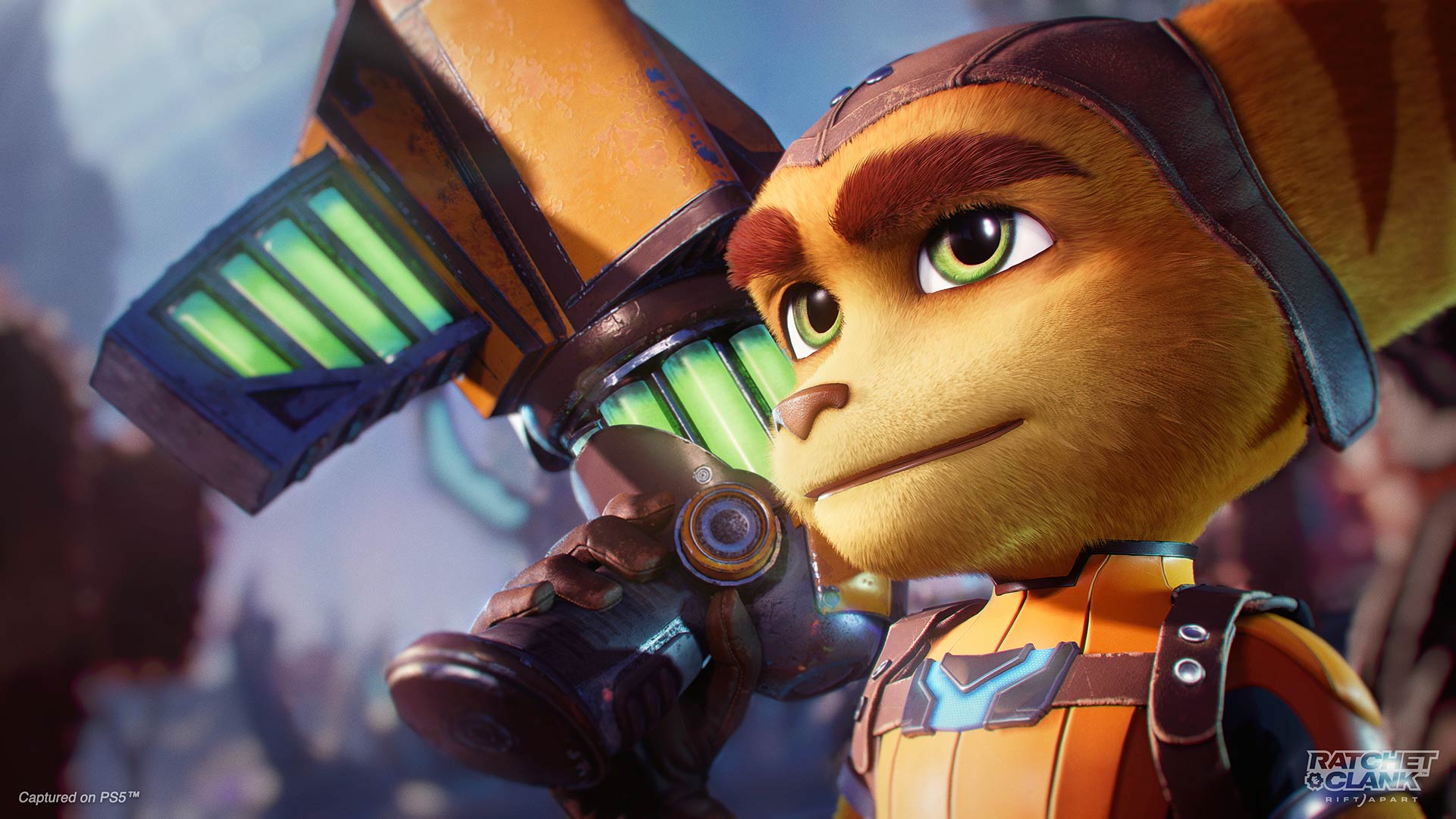 When Clank gets separated from Ratchet and picked up by Rivet early on in Rift Apart, I quickly came to admire how Ratchet quite literally goes to the ends of the earth to find his robotic friend. At the same time, Ratchet finds a new, equally likable mechanical companion as he contemplates seeking out the other Lombaxes. Meanwhile, Rivet is a terrifically realized new character, sharing Ratchet’s endearing pluckiness but having her own deep-seated trust issues — brought about from years of trauma due to fending for herself in a harsh empire — to deal with.

All told, both Lombaxes, as well as Clank and his robotic dimensional counterpart, undergo solid character arcs filled with more than their fair share of touching moments. Throw in some snappy banter, excellent performances (especially from James Arnold Taylor as Ratchet and Canada’s own Jennifer Hale as Rivet) and a sublime score from Devo’s Mark Mothersbaugh and you get one wildly entertaining yarn.

A beautiful multiverse unlike any other

Of course, it helps that the technology bringing all of this to life is so impressive. In fact, what Insomniac has achieved in Rift Apart from a visual perspective is absolutely jaw-dropping.

The level of detail on the game’s characters is staggering, be it Ratchet and Rivet’s individual hairs blowing in the wind or clumping together when wet, realistic ray tracing-enabled on Clank and Dr. Nefarious’ glistening metallic frames or the litany of tiny grooves and multi-sized spots on the reptilian ‘Goons-4-Less’ mercenaries. Factor in the lively and fluid character animations and this is easily the prettiest game I’ve ever played. 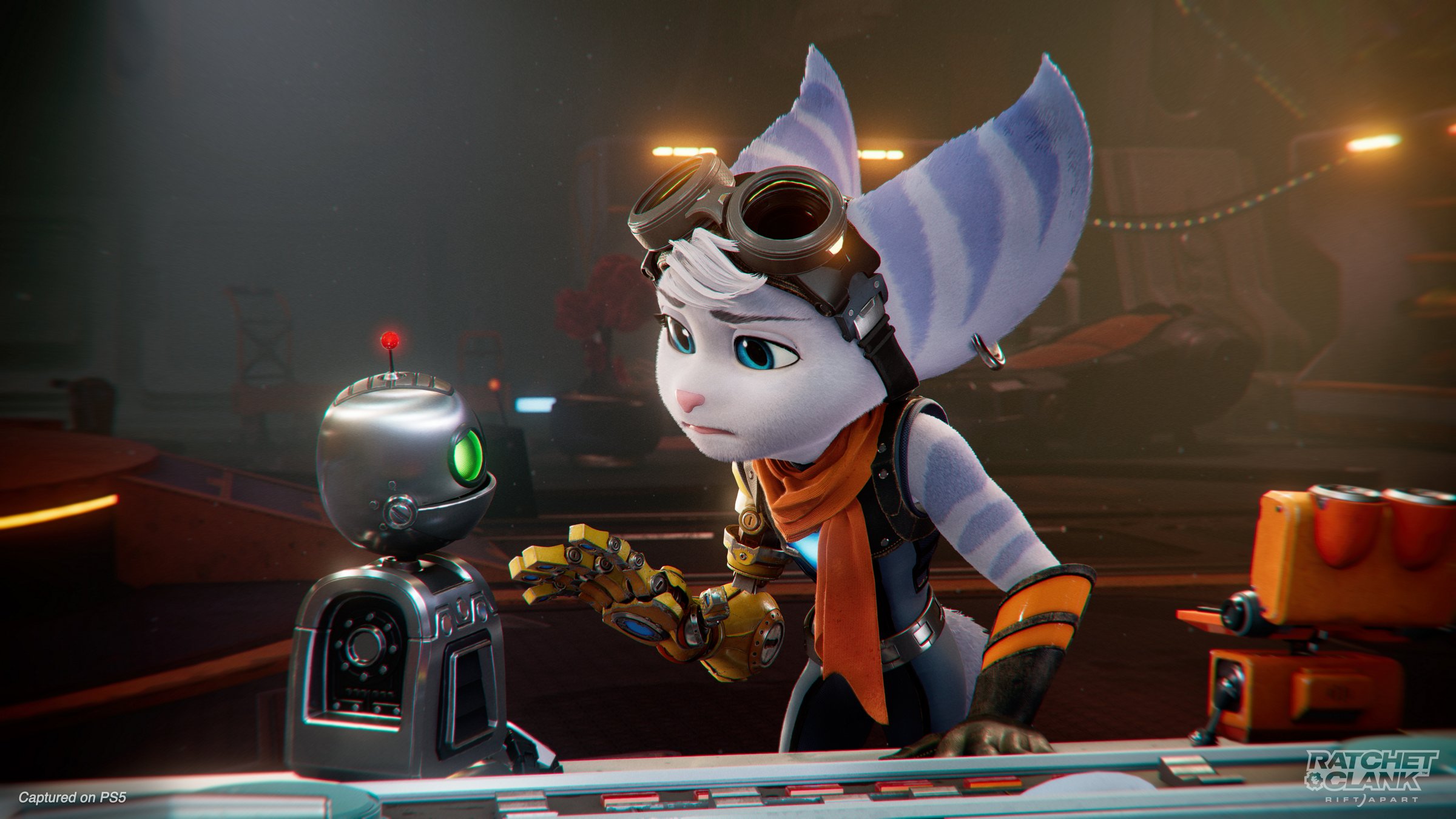 Further, seminal art direction has resulted in such memorable worlds as the musty swamps of Sargasso, the sprawling canyons of Savali and the cluttered industrial hub of Torren IV. Ratchet and Rivet have their own set of planets to visit, which had me constantly invested in the wacky hijinks they’d get up to on each one.

To spice levels up even more, Insomniac also takes full advantage of Rift Apart‘s multidimensional getup to take elements from one area, like the Ratchet and Clank floats of the opening Megalopolis level, and place them into drastically different ones (such as a short platforming section where you bounce on them to cross a pit) for delightfully zany results.

The only downside is that my time with Rift Apart was largely relegated to ‘Resolution Mode,’ which locks the frame rate at 30fps to maintain true 4K visuals with ray tracing. A 60fps ‘Performance Mode’ and 60fps with ray-tracing ‘Performance Mode RT’ were added in a day one patch that rolled out after I finished the game, but based on my brief time with these modes, they do work well. I still preferred Resolution Mode since the visual fidelity goes down a fair bit with the other two modes (less so, of course, when ray tracing is turned off), but overall, it’s great to have all three options.

But you’d expect a PS5-only game to be pretty. What’s even more crucial, then, is how Insomniac has leveraged the beefier tech to empower Rift Apart‘s gameplay in ways that truly feel “next-gen.” Much has been said about the PS5’s ultra-fast SSD so far, which, among other uses, allows games to load in mere seconds. In Rift Apart, though, it creates some of the most utterly inventive and thrilling gameplay experiences in recent memory.

At a base level, Rift Apart plays just like other Ratchet & Clank games, offering up well over a dozen insanely quirky and cartoonish weapons for you to blast enemies with. Likewise, Rift Apart will have you regularly jumping, grinding and swinging your way through areas in fairly light platforming sections. But since the SSD can stream much more content in the background, Insomniac’s been able to allocate more resources to what’s directly in front of you. 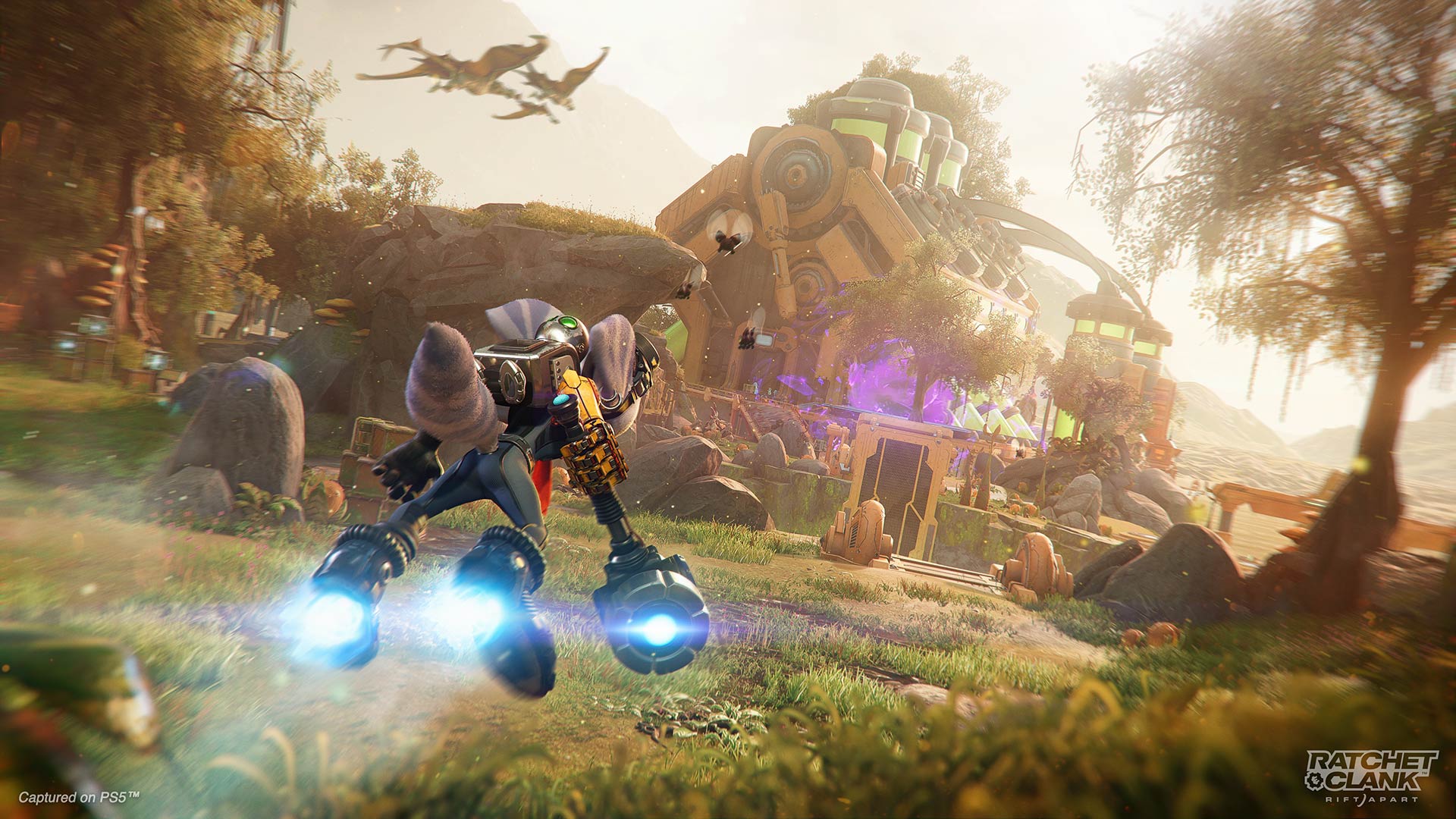 This doesn’t just mean denser areas, like a more NPC-packed ‘Megalopolis’ or forestry-dense ‘Sargasso’ — the aforementioned mix-and-match of parts of different levels also affects the moment-to-moment gameplay. At any given time, the game’s titular rifts can pull staples of other areas, such as the buccaneers of a pirate world, a dragon from an alien planet or a giant killer robot, and throw them right at you. In other sections, you might be the one who’s hurled through rifts, with the SSD near-instantly loading dramatically different settings and seamlessly transitioning you between them.

This is best seen in the mines of Blizar, which feature reality-warping crystals that Rivet can hit to change the entire world suddenly. Constantly flipping between environments to progress through an area — sometimes even midway through a grind rail — made for some exceptionally creative level design that kept me intrigued as I carried on. Games, by their nature, can sometimes feel repetitive and even predictable — how many of them have obviously laid-out cover spots or graspable ledges that blatantly telegraph what’s up ahead? — so I adored how Rift Apart constantly keeps gameplay feeling fresh through its varied and layered uses of the interdimensional rifts.

The SSD-powered tech also allows Insomniac to take its already creative weaponry to previously unreachable heights. Part of the fun in Rift Apart is discovering all of the weapons’ uniquely fascinating quirks, but I will say that my absolute favourite gun is the Topiary Sprinkler, which can stun enemies by coating them in foliage. On a visual level, it’s impressive to see everything from tiny robots to large spaceship bosses get instantly covered in greenery, but it’s also a remarkably effective way of handling groups of enemies while letting them take more damage from your other guns.

If this is what the PS5 is capable of this early on, I truly can’t wait to see where future games — along with Ratchet, Clank and Rivet — go from here.

The DualSense controller, meanwhile, adds another strategic layer to combat through your weapons’ alternative modes of fire. Take the Negatron Collider; pulling the adaptive trigger halfway will begin to charge the weapon, all while the controller’s haptics offer a satisfying rise in vibrational intensity to simulate the buildup of energy. From there, pulling the trigger all the way will release a powerful energy blast for a few seconds that, if well-aimed, can take out multiple enemies at once. Switching between firing types on the fly through trigger presses rather than menu navigation is an intuitive solution of maintaining the rhythmic flow of combat.

As in previous games, you can obtain ‘Bolts’ to purchase new weapons and ‘Raritarium’ to enhance them, while each gun levels up the more you use it (which, in turn, opens up even more upgrades). This created a satisfying gameplay loop of experimenting with different weapon matchups, such as freezing enemies with the Cold Snap before blowing them up in a field of colourful purple particle effects with the Shatterblast grenades.

Ratchet and Rivet have a few other new toys, including the Phantom Dash for dodging attacks and the Rift Tether to pull yourself to higher areas or quickly cross environmental hazards like hot springs. I appreciated how much more dynamic combat felt because of them; in a pinch, I could quickly zip away to avoid enemies or even formulate a new plan of attack. These two added mobility options, alongside the rifts and versatile weapons, all come together to create an absolutely fantastic gameplay experience that’s downright balletic in how smooth and tight it feels.

You can also use the Rift Tethers to go into miniature ‘Pocket Dimensions’ with their own little gimmick, like a prolonged wall-running segment or exploding platforms to quickly cross. These unlock armour pieces that offer buffs like reduced damage from certain enemy types or increases in Raritanium or Bolt gains — a smart way to reward exploration while further tapping into the level-within-a-level possibilities that the SSD affords. I only wish there was some ‘transmog’ option (as in, the ability to change or even hide the cosmetic aspects of gear while keeping their stat benefits) since I opted to not equip garish-looking (but otherwise useful) helmets in favour of being able to continuously admire Ratchet and Clank’s richly detailed facial models.

Ratchet & Clank: Rift Apart is the rare first-year new console exclusive that delivers on all fronts. If a surprisingly compelling story and gorgeous visuals weren’t enough, Insomniac has used the PS5’s powerful tech — namely, its SSD and DualSense controller — to produce an outstanding and engrossing gameplay experience. If this is what the PS5 is capable of this early on, I truly can’t wait to see where future games — along with Ratchet, Clank and Rivet — go from here.

Ratchet & Clank: Rift Apart will release exclusively on the PS5 on June 10th.

Hitting the Books: How memes spread through society like a ‘mind virus’

The struggle for survival is not always limited to animate objects. Ideas can be expressed just as biological genes are, compete for attention-based resources,...
Read more

How influencers fit into Twitter’s plans to double revenue

Hitting the Books: How memes spread through society like a ‘mind virus’

The struggle for survival is not always limited to animate objects. Ideas can be expressed just as biological genes are, compete for attention-based resources,...

Samsung Galaxy A52 5G Review: Not Perfect, But Reliable

Last year, I said Samsung's $400 Galaxy A51 was overpriced. Naturally, Samsung went ahead and jacked up the price of its successor, the...

11 Prime Day deals available now, and 5 more you can only get with your voice