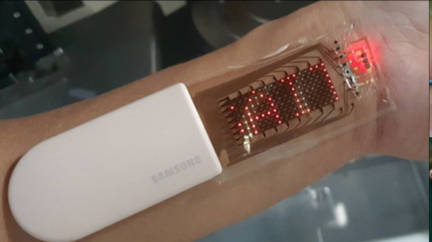 In a recent press release, Samsung’s Advanced Institute of Technology (SAIT) revealed that it has developed an OLED display with a built-in heart rate sensor that can be stretched by up to 30 percent.

The OLED display is like a skin patch that attaches to the wrist and offers fitness tracking information to the user, creating a “stretchable electronic skin form factor,” says Samsung.

SAIT researchers put the gadget through its paces during initial testing by connecting it to the inner wrist near the radial artery. This allowed the researchers to establish that the wrist movement did not mess with the display.

According to the news release, the stretchy OLED remained dependable through testing, with up to 30 percent of skin elongation. The test also proved that the sensor and OLED contraption could continue to function reliably even after 1,000 stretches.

Most fixed-form gadgets, as expected, break down or come apart when subjected to such strong physical manipulation. The researchers replaced the plastic substance used in previous stretchy displays with elastomer — a highly elastic and resilient material to overcome this barrier. Samsung then altered the elastomer’s molecular composition to increase its heat resistance and relieve tension generated by elongation, allowing the company to incorporate a semiconductor into their device.

Additionally, according to Samsung, the skin-like device attaches seamlessly to the user’s wrist, enabling continuous and accurate heartbeat measurements.

“The technology can also be expanded to use in wearable healthcare products for adults, children, and infants, as well as patients with certain diseases,” explained principal researcher Youngjun Yun.

The technology is still in the early phases of development and is continually being polished. According to the researchers, they intend to commercialize the technology by boosting system resolution, stretchability, and measurement accuracy to a level that allows mass manufacturing.

adminhttps://fmeinterview.com
Previous articleGraphene could allow hard drives to hold 10 times more data
Next articleHow to Use Podcasts in Teaching